At 3131 W Lewis, Flynn is helping build a bridge between today’s needs and tomorrow’s budget. 3131 W Lewis is owned by Jeff Scoon, owner of the branch’s current building and president of JL Audio. He owns several older properties in Phoenix. All of them have “well aged” roofs. 3131 Lewis was hailed out in 2011 and has been limping along ever since. Flynn proposed a re-roof, but it was out of budget. With limited options, Flynn changed course by repairing the critical leak points at the drains.

The crew used GAF Unisil II solvent based silicone, foam packs, and GAF trowel grade silicone. The service techs repaired and coated 10,000 sq. ft. at the drain which acts as the concentration point for the water and most likely to experience leaks. The roof is 33,000 sq. ft. in total with 1.5’’ of foam over BUR. 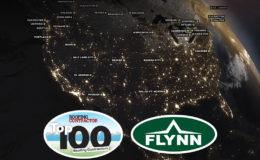